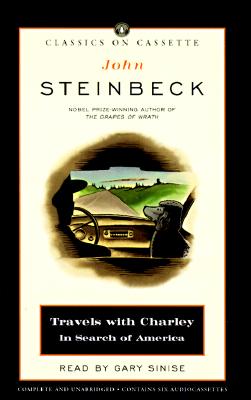 In 1960, at age 58, John Steinbeck set out with his French poodle, Charley, to rediscover the country he had been writing about for so many years. Together they crossed America from the northernmost tip of Maine to California's Monterey peninsula, stopping to smell the grass, to see the lights, and to hear the speech of the real America. Steinbeck dined with truckers, encountered bears at Yellowstone, and reflected on the American character, racial hostility, and the unexpected kindness of strangers. Lyrical, perceptive, and surprising, it's an indispensable portrait of our national identity.

JOHN STEINBECK (1902-1968) was awarded the Pulitzer Prize in 1940 and the Nobel Prize in Literature in 1962. Born in California, he worked at a series of odd jobs and attended Stanford University before beginning his writing career. Among his classic works are Of Mice and Men, The Red Pony, The Grapes of Wrath, East of Eden, and Cannery Row.