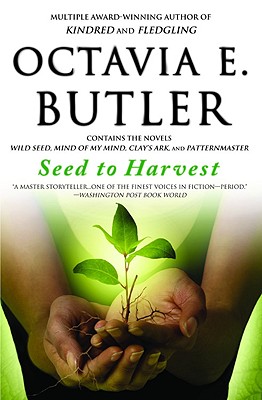 The complete Patternist series-the acclaimed science fiction epic of a world transformed by a secret race of telepaths and their devastating rise to power.

In the late seventeenth century, two immortals meet in an African forest. Anyanwu is a healer, a three-hundred-year-old woman who uses her wisdom to help those around her. The other is Doro, a malevolent despot who has mastered the power of stealing the bodies of others when his wears out. Together they will change the world.

Over the next three centuries, Doro mounts a colossal selective breeding project, attempting to create a master race of telepaths. He succeeds beyond his wildest dreams, splitting the human race down the middle and establishing a new world order dominated by the most manipulative minds on Earth.

In these four novels, award-winning author Octavia E. Butler tells the classic story that began her legendary career: a mythic tale of the transformation of civilization.

OCTAVIA E. BUTLERwas a renowned writer who received a MacArthur "Genius" Grant and PEN West Lifetime Achievement Award for her body of work. She was the author of several award-winning novels including Parable of the Sower, which was a New York Times Notable Book of the Year, and was acclaimed for her lean prose, strong protagonists, and social observations in stories that range from the distant past to the far future. Sales of her books have increased enormously since her death as the issues she addressed in her Afrofuturistic, feminist novels and short fiction have only become more relevant. She passed away on February 24, 2006.