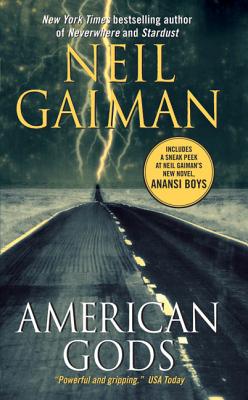 Shadow is a man with a past. But now he wants nothing more than to live a quiet life with his wife and stay out of trouble. Until he learns that she's been killed in a terrible accident.

Flying home for the funeral, as a violent storm rocks the plane, a strange man in the seat next to him introduces himself. The man calls himself Mr. Wednesday, and he knows more about Shadow than is possible.

He warns Shadow that a far bigger storm is coming. And from that moment on, nothing will ever he the same...

“Original, engrossing, and endlessly inventive; a picaresque journey across America where the travelers are even stranger than the roadside attractions.”
-George R. R. Martin

"American Gods is like a fast run downhill through a maze -- both exhilarating and twisted."
-Jane Lindskold, author of Changer and