The World According to Fannie Davis: My Mother's Life in the Detroit Numbers (Hardcover) 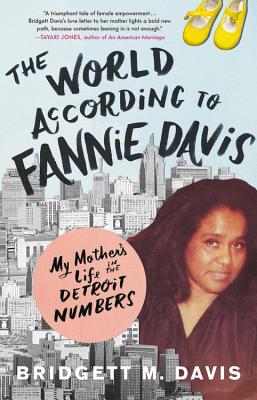 As seen on the Today Show: This true story of an unforgettable mother, her devoted daughter, and their life in the Detroit numbers of the 1960s and 1970s highlights "the outstanding humanity of black America" (James McBride).
In 1958, the very same year that an unknown songwriter named Berry Gordy borrowed $800 to found Motown Records, a pretty young mother from Nashville, Tennessee, borrowed $100 from her brother to run a numbers racket out of her home. That woman was Fannie Davis, Bridgett M. Davis's mother.
Part bookie, part banker, mother, wife, and granddaughter of slaves, Fannie ran her numbers business for thirty-four years, doing what it took to survive in a legitimate business that just happened to be illegal. She created a loving, joyful home, sent her children to the best schools, bought them the best clothes, mothered them to the highest standard, and when the tragedy of urban life struck, soldiered on with her stated belief: "Dying is easy. Living takes guts."
A daughter's moving homage to an extraordinary parent, The World According to Fannie Davis is also the suspenseful, unforgettable story about the lengths to which a mother will go to "make a way out of no way" and provide a prosperous life for her family -- and how those sacrifices resonate over time.

Bridgett M. Davis is Professor of Journalism and the Writing Professions at Baruch College, CUNY, where she teaches creative, film and narrative writing and is Director of the Sidney Harman Writer-in-Residence Program. A graduate of Spelman College in Atlanta, and Columbia University's Graduate School of Journalism, she is the director of the award-winning feature film Naked Acts, as well as the author of two novels, Into the Go-Slow and Shifting Through Neutral. She lives in Brooklyn, NY with her family.

"The World According to Fannie Davis is a daughter's gesture of loving defiance, an act of reclamation, an absorbing portrait of her mother in full. Blending memoir and social history, [Davis] recounts her mother's extraordinary story alongside the larger context of Motor City's rise and fall."—Jennifer Szalai, New York Times

"Davis's heartwarming memoir honors her remarkable mother, who made a good life for her family in the '60s and '70s."—New York Times, Editor's Choice

"The novelist and teacher illuminates the life of her iron-willed mother, who in the 1960s and '70s spearheaded
Detroit's shadow economy (through an illegal lottery known as "The Numbers") in order to bolster both her family and the city's burgeoning black middle class."—O, Oprah Magazine Reading Room

"The author candidly and poignantly transports readers to her formative years in Detroit, where her mother, Fannie, successfully ran numbers-- right from the family's dining room table-- with class, determination and dignity to spare."—Bridgette Bartlett Royall, Essence Magazine

"The book blends memoir with the compelling social history of the numbers, a lottery game that operated outside of the law but very much inside the context of African-American life and culture."—Kate Tuttle, The Boston Globe

"The story of Fannie Davis, as her daughter so thoroughly tells it, is the story of not just one woman, in one city, at one period in time; it is, in many ways, the story of black America, the resilience and solidarity of the marginalized."—Entertainment Weekly

"Novelist Bridgett M. Davis turned to nonfiction in what started out as the story of her mother...But this memoir turned out to be much more: a panorama of African-American communities in this era, the resolve they demonstrated and the restrictions put upon them in their pursuit of the American dream. It's a family story of nationwide scale."—David Canfield, Entertainment Weekly

"Bridgett M. Davis draws a loving portrait of her unforgettable mother who gamed the system and won. Davis is a witness to the journey of the African American strivers of Detroit, but she is also a witness to the evolution of her own remarkable family history. Combining rigorous research with an insider's access, The World According To Fannie Davis is a triumphant tale of female empowerment. Bridgett Davis' love letter to her mother lights a bold new path, because sometimes leaning in is not enough."—Tayari Jones, author of An American Marriage

"This book brought tears to my eyes...Every once in a while, a book comes along that shows the magic, the kindness, the outstanding humanity of a black America that so few now remember... Fannie Davis was always described as 'lucky.' That her talented youngest daughter Bridgett had the good sense to share her story with us all makes us lucky as well."—James McBride, author of The Color of Water, winner of the National Book Award for The Good Lord Bird, and recipient of the 2015 National Humanities Medal

"A timely, intriguing and well-told story of what it means to come of age during a time when people found so many amazing ways to survive...at once amazingly specific and trail blazingly universal. I couldn't put this book down."—Jacqueline Woodson, winner of the National Book Award and author of Brown Girl Dreaming and Another Brooklyn

"Davis has a great, sharp way of writing about her mom, and she captures the energy of Detroit at that time."—Glory Edim, founder of Well-Read Black Girl

"The World According To Fannie Davis is a world of urban wit, grit and toughness. It is also a world of transformative magic- the magic of feminine strength and grace...as many people as possible should know about Fannie Davis."—Mary Gaitskill, author of National Book Award finalist Veronica

"The payoffs here are many, including this daughter's loving take on that relentless class of African Americans who made prosperity imaginable for others no matter the odds."—Gregory Pardlo, author of Air Traffic and Digest, winner of the 2015 Pulitzer Prize for Poetry

"An altogether fresh take on the black experience, and a compelling piece of the American experience. An absorbing and delightful book."—Russell Shorto, author of The Island at the Center of the World

"[A] rare book that successfully combines vivid family memoir with timely social history...I loved this book."—Alysia Abbott, author of Fairyland: A Memoir of My Father

"A captivating, energetic memoir that entertains and enlightens as it reminds us of the unstoppable force-in life and on the page-of a mother determined to lift her family up."—George Hodgman, veteran magazine and book editor and author of Bettyville

"The World According to Fannie Davis is a compelling, unusual book. Bridgett Davis tells an insightful tale of how low-stakes gambling helped fuel-and fund-racial justice work in Detroit, while giving us an intimate, invaluable look at the complexities of class for African-Americans. Her story also makes a trenchant point: If a black family could achieve this much while locked out of decent mortgages and good jobs, imagine what they could have done if given the same opportunities as whites. A fascinating read."—Tracie McMillan, author of the New York Times bestseller The American Way of Eating: Undercover at Walmart, Applebee's, Farm Fields and the Dinner Table

"Davis' memoir is a loving portrait of her resourceful mother and of Motor City in the 1960s and '70s."—Tom Beer, Newsday

"The World According to Fannie Davis is a love letter to [Davis'] mother, but also a crash course in economics and Black history...I gained a clearer understanding of what the phrase ["I'm playing the numbers"] really meant and how the lottery's existence was embedded in the livelihood and welfare of Black lives especially."—Jennifer Baker, Electric Lit

"The point of this glorious, elaborate, and cinematic detail is that it says so much about Fannie, healthy black motherhood, and the American experience...Bridgett weaves two other disparate yet fundamentally American stories together through her portrait of her mother. One is a beautifully complex rendering of black motherhood that offers up humanity without stereotype-unfortunately rare in literature about black women. There's a simple but very profound, uncomplicated love between mother and daughter in this book. Another is what Bridgett calls the blue-collar bourgeoisie, a full, vibrant space of ingenuity and enterprise that allows for a multifaceted black humanity to unfold in refreshing and colorful ways."—Kirkus, cover feature

"Novelist Bridgett M. Davis, professor at Baruch college and Fannie's youngest child, witnessed it all, and ever since she has fiercely protected her mother with her silence - until now. In her new memoir The World According to Fannie Davis: My Mother's Life in the Detroit Numbers, Davis paints a warm, loving portrait of her mother and their tight-knit family - not untouched by tragedy despite their good luck - and what it was like to grow up with the Numbers constantly playing in the background."—Sheila McClear, Longreads

"For 34 years, Bridgett Davis' mom, Fannie, ran a numbers racket out of her apartment in one of Detroit's poorest neighborhoods. While the business was illegal, Fannie survived and thrived, raising five kids and a grandson with wit, style and a motto: 'Dying is easy. Living takes guts.'"—Mackenzie Dawson, New York Post "Best Books of the Week"

"A remarkable story of a mother...Sharp and unwilling to be hemmed in by the dual restrictions of race and gender, she did what it took to raise a family and to uplift a community...In this admiring and highly compelling memoir, Bridgett Davis tells the story of her beloved mother. This is not a story about capitalizing on degeneracy. It is one of hope and hustling in a world where to have the former almost demanded the latter. This outstanding book is a tribute to one woman but will surely speak to the experiences of many."—Kirkus, starred review

"Novelist Davis honors her mother in this lively and heartfelt memoir of growing up in the 1960s and '70s Detroit...This charming tale of a strong and inspirational woman offers a tantalizing glimpse into the past, savoring the good without sugarcoating the bad."
—Publishers Weekly

"Must read non-fiction...Readers will be fascinated by Fannie's life and inspired by her love of her family."—Elizabeth Rowe, Bookish

"Amoving portrait... Her writing feels rooted in the city and its changing landscape. Combining historical research with extensive interviews, The World According to Fannie Davis is an engrossing tribute to a vibrant, hardworking, unforgettable woman."—Booklist review

"[Davis] humanizes the hustle...This book will be a thought-provoking and inspirational delight for anyone searching for understanding in a world designed for only some to succeed."

"A straight, no chaser view into the life of a Detroit numbers runner, as told in loving tribute by her devoted daughter."—Dawn M. Baskerville, The Grio

"Fannie Davis is many things - a history of Detroit in its heyday, a sociology of black migrant culture and a taxonomy of the underground lottery of Fannie's era. Davis interviewed family members and conducted research, excavating Fannie's life and times. But the book is not academic in tone. Davis' account of her mother's life and business is first and foremost a loving memoir."
—Erica Ciccarone, Nashville Scene

"This true and suspenseful story is an inspiring tale of an unconventional family."—Ashley Johnson, Parade

"Meet Fannie Davis. You won't be forgetting her anytime soon. In this memoir, Bridgett M. Davis recalls growing up in Detroit in the '60s and '70s with the kingpin of an illegal gambling operation for a mother."—Refinery 29

"Davis illuminates her mother's efforts to provide for the family despite the racial antagonism of the time. Her beautiful prose turns a tale of perseverance into a love story."—The Christian Science Monitor

"For readers who crave the richer, fuller history of America than is usually imparted by school books, Davis emerges as a valuable and needed voice. But mostly her book stands as a loving tribute to a remarkable woman, her mother."—Joan Gaylord, The Christian Science Monitor