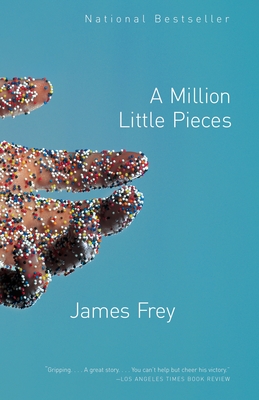 NATIONAL BESTSELLER • A gripping memoir about the nature of addiction and the meaning of recovery from a bold and talented literary voice. “Anyone who has ever felt broken and wished for a better life will find inspiration in Frey’s story.” —People

By the time he entered a drug and alcohol treatment facility, James Frey had taken his addictions to near-deadly extremes. He had so thoroughly ravaged his body that the facility’s doctors were shocked he was still alive. The ensuing torments of detoxification and withdrawal, and the never-ending urge to use chemicals, are captured with a vitality and directness that recalls the seminal eye-opening power of William Burroughs’s Junky.

But A Million Little Pieces refuses to fit any mold of drug literature. Inside the clinic, James is surrounded by patients as troubled as he is—including a judge, a mobster, a one-time world-champion boxer, and a fragile former prostitute to whom he is not allowed to speak—but their friendship and advice strikes James as stronger and truer than the clinic’s droning dogma of How to Recover. James refuses to consider himself a victim of anything but his own bad decisions, and insists on accepting sole accountability for the person he has been and the person he may become—which runs directly counter to his counselors' recipes for recovery.

James has to fight to find his own way to confront the consequences of the life he has lived so far, and to determine what future, if any, he holds. It is this fight, told with the charismatic energy and power of One Flew over the Cuckoo's Nest, that is at the heart of A Million Little Pieces: the fight between one young man’s will and the ever-tempting chemical trip to oblivion, the fight to survive on his own terms, for reasons close to his own heart. "

JAMES FREY is originally from Cleveland. He is the bestselling author of A Million Little Pieces and My Friend Leonard. He lives in New York.

“James Frey's staggering recovery memoir could well be seen as the final word on the topic.” —San Francisco Chronicle

“The most lacerating tale of drug addiction since William S. Burroughs' Junky.” —The Boston Globe

“Anyone who has ever felt broken and wished for a better life will find inspiration in Frey’s story.” —People

“Ripping, gripping.... It’s a staggeringly sober book whose stylistic tics are well-suited to its subject matter, and a finger in the eye of the culture of complaint.... Engrossing.” —Philadelphia Inquirer

“A frenzied, electrifying description of the experience.” —The New Yorker

“One of the most compelling books of the year.... Incredibly bold.... Somehow accomplishes what three decades’ worth of cheesy public service announcements and after-school specials have failed to do: depict hard-core drug addiction as the self-inflicted apocalypse that it is.” —The New York Post

“A rising literary star ... has birthed a poetic account of his recovery. [A Million Little Pieces is] stark ... disturbing ... rife with raw emotion.” —Chicago Sun-Times

“Frey will probably be hailed in turn as the voice of a generation.” —Elle

“We can admire Frey for his fierceness, his extremity, his solitary virtue, the angry ethics of his barroom tribe, and his victory over his furies.... A compelling book.” —New York

“An intimate, vivid and heartfelt memoir. Can Frey be the greatest writer of his generation? Maybe.” —New York Press

“Insistent as it is demanding.... A story that cuts to the nerve of addiction by clank-clank-clanking through the skull of the addicted.... A critical milestone in modern literature.” —Orlando Weekly

“At once devastatingly bleak and heartbreakingly hopeful.... Frey somehow manages to make his step-by-step walk through recovery compelling.” —Charlotte Observer

“A stark, direct and graphic documentation of the rehabilitation process.... The strength of the book comes from the truth of the experience.” —The Oregonian

“Describes the hopelessness and the inability to stop with precision.... As anyone who has ever spent time in a rehab can testify ... he gets that down too.” —St. Louis Post-Dispatch

“Frey comes on like the world’s first recovering-addict hero.... [His] criticism of the twelve-step philosophy is provocative and his story undeniably compelling.” —GQ

“Frey has devised a rolling, pulsating style that really moves ... undeniably striking.... A fierce and honorable work that refuses to glamorize [the] author’s addiction or his thorny personality.... A book that makes other recovery memoirs look, well, a little pussy-ass.” —Salon