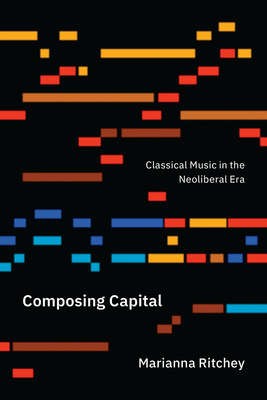 Marianna Ritchey is assistant professor of music history at the University of Massachusetts, Amherst.

"Music is no longer to be listened to in and for itself, therefore classical music in Beethoven and Babbitt’s sense is dead. Ritchey’s interesting reflections . . . on the future of music criticism, and the potential for music outside capitalism, offer no way back."
— Andrew Blake

"According to Spotify, I streamed almost 400 genres this year, although I didn’t know that many existed. (Spotify claims the existence of over 1,400-plus, including eccentricities like ‘abstracto’—unhelpfully described as ‘like complextro, but more abstract than rhythmic’— and ‘escape room.’) Without considering the specificities, the data makes me seem progressive, diverse, culturally omnivorous. As music history professor Marianna Ritchey observes in her book, Composing Capital: Classical Music in the Neoliberal Era, music is praised when it embraces 'stylistic eclecticism,' prioritizing broad appeal over specialization. But is skimming through 40 genres really better than engaging actively with two? Perhaps crossing borders isn’t as transgressive as it seems: A globe-trotter may not be truly adventuring if in each country, he contains himself to variations on the same sleek, blandly mid-centuryish Airbnb."
— Cat Zhang

"Ritchey explores the relationship between neoliberal capitalism and classical music, showing how many of the democratizing and innovative elements of the genre go hand-in-hand with corporate power. Using detailed social and musicological studies of key composers, movements, opera companies, and tech advertising, the book offers a critical but sympathetic analysis of the potential, but also the limits, of classical music. Accessibly written, blending critical theory with contemporary case studies, Composing Capital will be essential reading across arts and social sciences, as well as for business and technology scholars."
— New Books Network

"Ritchey presents several case studies demonstrating ways neoliberal capitalism has shaped ideas about contemporary classical music. Focusing on composers and performers in the United States, the author explores various ways these artists gain patronage and revenue in a culture increasingly focused on making a profit. . . . Richey challenges the reader to consider how the lines between creativity and entrepreneurship are blurred. Her compelling critique leaves one hoping for solutions. She concludes by challenging readers to consider alternatives. Recommended."
— Choice

"Marianna Ritchey’s Composing Capital: Classic Music in the Neoliberal Era is a well-written, detailed study of how neoliberalism has influenced the way classical music is not only composed, but also, how it is consumed and utilized as a tool for corporate interests. . . .  Ritchey is an astute critic of neoliberalism—readers who want to know what is currently happening in the classical music scene will also get a clear understanding of neoliberalism"
— Andrea Syzdek

"Composing Capitalism is a great achievement, a conceptual tour de force addressing a burning issue of our times and demonstrating how musicological research can productively contribute to both the analysis of general societal problems and their possible improvement."
— Journal of the Society for Musicology in Ireland

"Composing Capital opens our eyes and ears to the unholy dance between classical music and the neoliberal economic values that underpin American political culture. In a theoretically sophisticated and hard-hitting critique, Ritchey shows how new music has unwittingly adopted capitalism's 'rhetorical benevolence,' embracing flexibility, entrepreneurship, and disruption as positive values rather than recognizing them as destabilizing and exploitative forces. Meanwhile, giant tech conglomerates enlist Beethoven to lend their products positive associations like freedom and individuality and to provide a simulacrum of historical depth in a radically anti-historical business culture. This is an important book, and it comes at just the right time."
— Anne C. Shreffler, Harvard University

“There is something not only despicable and insidious but also tragic and misguided about the ways in which composers, compositional scenes and collectives, performing companies, and advertising/production composers/arrangers and sound designers have actively reproduced ideologies of competition, entrepreneurship, individualism, and marketization. A bracing tonic to read, and filled with energetic prose and critical enthusiasm, as well as remarkably clear expositions of ideas that elsewhere have been made unnecessarily complicated and unclear, Composing Capital is both a polemic and a pensive meditation on the present state of things. This is an inspiring and powerful book.”
— Sumanth Gopinath, University of Minnesota, author of "The Ringtone Dialectic: Economy and Cultural Form"

“An extraordinarily important book. The time is ripe for this kind of statement about the relationships between neoliberalism and contemporary classical music practice, discourse, and economic circulation; and, moreover, for such a book to be penned by the hand of a musicologist. Indeed, it is pressing. There is simply no denying the political relevance of musicology’s thinking-through of its imbrications with neoliberal logistics; the drive toward conceptual ossification of its fundamentals must, at all costs, be stalled. Composing Capital will be a significant means by which this might be done.”
— James R. Currie, State University of New York at Buffalo, author of "Music and the Politics of Negation"