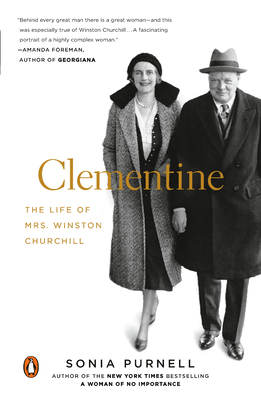 “Engrossing…the first formal biography of a woman who has heretofore been relegated to the sidelines.”–The New York Times

From the author of the New York Times bestseller A Woman of No Importance, a long overdue tribute to the extraordinary woman who was Winston Churchill’s closest confidante, fiercest critic and shrewdest advisor that captures the intimate dynamic of one of history’s most fateful marriages.

Late in life, Winston Churchill claimed that victory in the Second World War would have been “impossible” without the woman who stood by his side for fifty-seven turbulent years. Why, then, do we know so little about her? In this landmark biography, a finalist for the Plutarch prize, Sonia Purnell finally gives Clementine Churchill her due.

Born into impecunious aristocracy, the young Clementine Hozier was the target of cruel snobbery. Many wondered why Winston married her, when the prime minister’s daughter was desperate for his attention. Yet their marriage proved to be an exceptional partnership. "You know,"Winston confided to FDR, "I tell Clemmie everything."

Through the ups and downs of his tumultuous career, in the tense days when he stood against Chamberlain and the many months when he helped inspire his fellow countrymen and women to keep strong and carry on, Clementine made her husband’s career her mission, at the expense of her family, her health and, fatefully, of her children. Any real consideration of Winston Churchill is incomplete without an understanding of their relationship. Clementine is both the first real biography of this remarkable woman and a fascinating look inside their private world.

"Sonia Purnell has at long last given Clementine Churchill the biography she deserves. Sensitive yet clear-eyed, Clementine tells the fascinating story of a complex woman struggling to maintain her own identity while serving as the conscience and principal adviser to one of the most important figures in history. I was enthralled all the way through." –Lynne Olson, bestselling author of Citizens of London

Sonia Purnell is a biographer and journalist who has worked at The Telegraph and Sunday Times, and the author of A Woman of No Importance: The Untold Story of the American Spy Who Helped Win World War II. Her first book, Just Boris, a candid portrait of London mayor and Brexit champion Boris Johnson, was longlisted for the Orwell prize. Clementine (published as First Lady in the UK) was chosen as a Book of the Year by The Telegraph and Independent and shortlisted for the Plutarch Award for biography.

"Really one of the great stories of all time...I loved it so much that I wanted to make a movie about it" –Cher

"An astute, pacey account of a woman who hardly ever emerged from the shadows. It is a sharp analysis of what it meant to be a politician's wife. . . that shows how much we can learn about Winston Churchill from his wife and marriage."–The Wall Street Journal

“An acute and sympathetic biography which brings Clementine Churchill out of the shade into which her illustrious and domineering husband has cast her and shows how key she was to his success.  Sonia Purnell makes us ask how Clementine endured life with Winston, and provides the answers.” –Margaret MacMillan, author of Paris 1919 and The War that Ended Peace

“Thorough and engaging. . . Purnell’s extensive and insightful biography offers a much welcome portrait of Clementine Churchill, a woman whose remarkable life has long been overshadowed by her famous husband.” —Washington Post

“Fascinating… [Purnell's] book may leave you thinking Clementine is one of the most underrated, complex women in British history.” –The Daily Beast

“A fascinating and well-written account of a woman who played a key role in many pivotal moments of early-20th-century British and world politics.” —Minneapolis Star-Tribune

“The extensive research shines a deserved spotlight on Britain’s first lady through wartime and beyond." —Fort Worth Star-Telegram

“Sonia Purnell has restored Clementine Churchill to her rightful place in history. Behind every great man there is a great woman–and this was especially true of Winston Churchill.Clementine is a fascinating portrait of a highly complex woman who only ever showed a brave and elegant face to the world. At last, thanks to Sonia Purnell’s excellent book, we see her  true nature.” –Amanda Foreman, author of A World on Fire

"Until this biography, Clementine’s influence had been completely overlooked and undervalued by Winston's biographers. Clementine was a complicated, mercurial figure, and Purnell does a wonderful job painting a full picture of a woman who was an excellent wife, a mediocre at best mother, and privy to some of the most profound moments of the modern era.—Jessica Grose, Lenny Letter

“At last Sonia Purnell has given us the first political biography of  Clementine Churchill, a woman of power and progressive vision.  Although she was her husband's best guide and most astute advisor during the worst of times, her essential role is generally unacknowledged.   Boldly written and illuminating, this is a generative restoration of a fascinating woman who transcended family grief and marital agonies to lead her husband and the nation with grace, commitment and persistence.”
–Blanche Wiesen Cook, author of Eleanor Roosevelt

"In this wonderful book Sonia Purnell has at long last given Clementine Churchill the biography she deserves. Sensitive yet clear-eyed, Clementine tells the fascinating story of a complex woman struggling to maintain her own identity while serving as the conscience and principal adviser to one of the most important figures in history. Purnell succeeds brilliantly at an almost impossible task: providing fresh and thought-provoking insights into Winston Churchill in the course of examining his complicated marriage. I was enthralled all the way through."–Lynne Olson, bestselling author of Citizens of London

“An excellent book…Both scrupulous and fair-minded, Sonia Purnell has done her subject proud in this eye-opening and engrossing account of the strong-willed and ambitious woman without whom Winston Churchill’s political career would have been a washout.”
–Miranda Seymour, The Telegraph

“It seems extraordinary that no one has given this remarkable woman proper biographical treatment before. . . She sacrificed her children and her health in the greater service of her husband, but she also kept him buoyant. This book is a salutary reminder that the Churchills were always a team.” –The Times (UK)

“Compellingly readable. . . Sonia Purnell’s biography of Winston’s wife Clementine brings her out from behind the shadow cast by the Great Man. She became her husband’s wise counselor, discreetly offering sound advice, re-writing his speeches, toning down his foolish or angry letters, preventing him from making certain terrible political mistakes. . . Her wheeling and dealing was done behind a veil of gracious femininity.”
–The Independent (UK)

“Eye-opening. . . A bold biography of a bold woman; at last Purnell has put Clementine Churchill at the center of her own extraordinary story, rather than in the shadow of her husband’s.”
–Mail on Sunday (UK)

“In our own era of sturdy individualism, it is remarkable to read of Clementine’s resolve to subordinate her own desires and her children’s happiness to her husband’s cause. . . An intriguing study of a character both deeply flawed and, in her way, magnificent.”
–The Evening Standard (UK)

“Sonia Purnell’s fine biography. . . brings out of the shadows this formidable woman who was much more than strictly a spouse.” —Newsday

“A sharply drawn, absorbing portrait of Churchill’s elegant, strong-willed wife, who was also his adviser, supporter, protector, and manager. . . Purnell argues persuasively for Clementine's importance to history: she functioned as her husband's astute political strategist; insisted that he consider her feminist views; vetted his speeches; and campaigned for his successes. . . A riveting, illuminating life of a remarkable woman. –Kirkus Reviews (Starred Review)

“This exemplary biography illustrates how Clementine’s intelligence, hard work, and perseverance in often difficult circumstances made her every bit a match for her remarkable, intimidating husband, and a fascinating figure in her own right.” —Publishers Weekly (Starred Review)

“Purnell does a remarkable job of proving that Clementine had a large impact on Winston’s life. . . He seems to have known immediately upon meeting her that she would be the one who could support his great ambitions and moderate his mood swings and gambling. . . She edited his writing, advised him on political decisions, and volunteered in many ways throughout both world wars. Her significance, in many way, can be compared to that of Eleanor Roosevelt.”
--Library Journal