The Attic Child: A Novel (Hardcover) 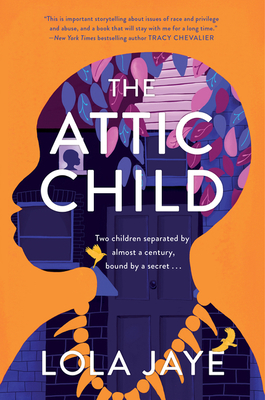 A hauntingly powerful and emotionally charged novel about family secrets, love and loss, identity and belonging.

Two children trapped in the same attic, almost a century apart, bound by a shared secret.

Early 1900s London: Taken from his homeland, twelve-year-old Celestine spends most of the time locked away in the attic of a large house by the sea. The only time Celestine isn’t bound by confines of the small space is when he is acting as an unpaid servant to English explorer Sir Richard Babbington, As the years pass, he desperately clings on to memories of his family in Africa, even as he struggles to remember his mother’s face, and sometimes his real name . . .

1974: Lowra, a young orphan girl born into wealth and privilege whose fortunes have now changed, finds herself trapped in the same attic. Searching for a ray of light in the darkness of the attic, Lowra finds under the floorboards an old-fashioned pen, a porcelain doll, a beaded necklace, and a message carved on the wall, written in an unidentifiable language. Providing comfort for her when all hope is lost, these clues will lead her to uncover the secrets of the attic.

Lola Jaye was born and raised in London, England, where she still makes her home; she has also lived briefly in Nigeria. By the Time You Read This—Lola's first U.S. novel—was published by HarperCollins in 2009. Her inspirational essay "Reaching for the Stars: How You Can Make Your Dreams Come True," in which she charted her journey from foster child to author, was released in 2009 as part of the U.K.'s wildly popular Quick Reads program.

“The Attic Child is an impressive feat of imagination, and a great example of how one photograph can inspire a whole world. The interlinked stories of two children moved and upset me in all the right ways. This is important storytelling about issues of race and privilege and abuse, and a book that will stay with me for a long time.” — Tracy Chevalier

“Powerful and emotional.” — Lisa Jewell on The Attic Child