Black Birds in the Sky: The Story and Legacy of the 1921 Tulsa Race Massacre (Hardcover) 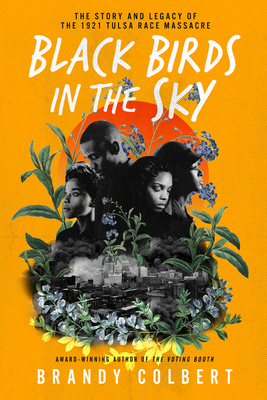 “A captivating book that not only teaches readers about the Tulsa Race Massacre but also looks at the bigger picture of what is the United States. Filled with history centered around different racial communities, the book does justice to those who did not learn certain history lessons in traditional educational institutions.”
— Melissa Silvester, Boogie Down Books, Bronx, NY

A searing new work of nonfiction from award-winning author Brandy Colbert about the history and legacy of one of the most deadly and destructive acts of racial violence in American history: the Tulsa Race Massacre. Winner, Boston Globe-Horn Book Award.

In the early morning of June 1, 1921, a white mob marched across the train tracks in Tulsa, Oklahoma, and into its predominantly Black Greenwood District—a thriving, affluent neighborhood known as America's Black Wall Street. They brought with them firearms, gasoline, and explosives.

In a few short hours, they'd razed thirty-five square blocks to the ground, leaving hundreds dead. The Tulsa Race Massacre is one of the most devastating acts of racial violence in US history. But how did it come to pass? What exactly happened? And why are the events unknown to so many of us today?

These are the questions that award-winning author Brandy Colbert seeks to answer in this unflinching nonfiction account of the Tulsa Race Massacre. In examining the tension that was brought to a boil by many factors—white resentment of Black economic and political advancement, the resurgence of white supremacist groups, the tone and perspective of the media, and more—a portrait is drawn of an event singular in its devastation, but not in its kind. It is part of a legacy of white violence that can be traced from our country's earliest days through Reconstruction, the Civil Rights movement in the mid–twentieth century, and the fight for justice and accountability Black Americans still face today.

Brandy Colbert is the award-winning author of several books for children and teens, including Black Birds in the Sky: The Story and Legacy of the 1921 Tulsa Race Massacre, which was the winner of the 2022 Boston Globe-Horn Book Award for Nonfiction and a finalist for the American Library Association's Excellence in Young Adult Nonfiction Award; Stonewall Book Award winner Little & Lion; and The Only Black Girls in Town. Her books have been chosen as Junior Library Guild Gold Standard Selections, and have been named to many best of lists, including the ALA's Best Fiction for Young Adults and Notable Children's Books. Her writing has been published in the New York Times, and her short stories and essays have appeared in several critically acclaimed anthologies for young people. She is on faculty at Hamline University's MFA program in writing for children, and lives in Los Angeles. You can find her online at www.brandycolbert.com.

"Colbert writes confidently about the truth of American history that has been long omitted from textbooks and conversations, and presents a case for acknowledging lingering racist ideas, sentiments, and assumptions and for holding ourselves accountable to overturning the harm that racism has caused. Necessary reading for any student of history or for anyone trying to understand our present." — Booklist (starred review)

"This sophisticated volume makes clear that the destruction of Black property and lives in the Tulsa Race Massacre was not an isolated incident. The clear, readable prose supports a greater understanding both of how and why incidents like the one in Tulsa happened and their exclusion from curriculum and conversations about U.S. history. A compelling recounting that invites and encourages readers to grapple with difficult history." — Kirkus Reviews (starred review)

"Alternating between survivor quotes, a detailed background of Oklahoma and Black chattel slavery, and a stirring account of the disturbing 1921 events, Colbert displays an impeccable grasp of the history of segregated Black towns and communities, and the powder keg of hatred and prejudice that would eventually condemn it. Powerful." — Publishers Weekly (starred review)

"VERDICT: A must-have first purchase for all libraries; this text invites readers to engage with a difficult history that’s essential in our understanding of today’s world." — School Library Journal (starred review)

"Colbert paints a clear picture of how and why this racial massacre occurred and encourages all readers, regardless of age or race, to confront the difficult and often obscured history of racial violence in the United States." — Shelf Awareness (starred review)

"Black Birds in the Sky tells the truth about an event that every American should know about. It’s a horrifying account told with great care." — BookPage

"Colbert extends her range with this excellent nonfiction book, a welcome contribution to the growing literature about this tragedy." — Horn Book Magazine

"This essential story will help you understand our country better--both where we've been and where we need to go." — Steve Sheinkin, author of Bomb and The Port Chicago 50

"This book is a necessary read for EVERYONE." — Frederick Joseph, New York Times bestselling author of The Black Friend