The Subtle Art of Not Giving a F*ck: A Counterintuitive Approach to Living a Good Life (Hardcover) 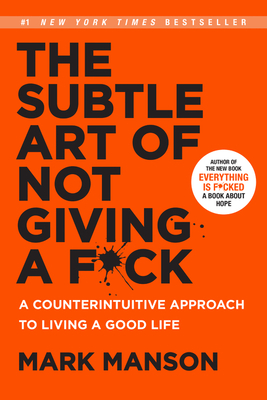 In this generation-defining self-help guide, a superstar blogger cuts through the crap to show us how to stop trying to be "positive" all the time so that we can truly become better, happier people.

For decades, we’ve been told that positive thinking is the key to a happy, rich life. "F**k positivity," Mark Manson says. "Let’s be honest, shit is f**ked and we have to live with it." In his wildly popular Internet blog, Manson doesn’t sugarcoat or equivocate. He tells it like it is—a dose of raw, refreshing, honest truth that is sorely lacking today. The Subtle Art of Not Giving a F**k is his antidote to the coddling, let’s-all-feel-good mindset that has infected modern society and spoiled a generation, rewarding them with gold medals just for showing up.

Manson makes the argument, backed both by academic research and well-timed poop jokes, that improving our lives hinges not on our ability to turn lemons into lemonade, but on learning to stomach lemons better. Human beings are flawed and limited—"not everybody can be extraordinary, there are winners and losers in society, and some of it is not fair or your fault." Manson advises us to get to know our limitations and accept them. Once we embrace our fears, faults, and uncertainties, once we stop running and avoiding and start confronting painful truths, we can begin to find the courage, perseverance, honesty, responsibility, curiosity, and forgiveness we seek.

There are only so many things we can give a f**k about so we need to figure out which ones really matter, Manson makes clear. While money is nice, caring about what you do with your life is better, because true wealth is about experience. A much-needed grab-you-by-the-shoulders-and-look-you-in-the-eye moment of real-talk, filled with entertaining stories and profane, ruthless humor, The Subtle Art of Not Giving a F**k is a refreshing slap for a generation to help them lead contented, grounded lives.

Mark Manson is the New York Times bestselling author of The Subtle Art of Not Giving a F*ck (more than ten million copies sold worldwide) and a star blogger. Manson sold more than 250,000 copies of his self-published book, Models: Attract Women Through Honesty. Before long, his off-the-cuff voice was resonating with a much broader audience via his brilliantly counterintuitive essays on happiness. With titles like “The Most Important Question of Your Life,” “The Subtle Art of Not Giving a F*ck,” and “No, You Can’t Have It All,” his work was reposted by Elizabeth Gilbert, Chris Hemsworth, Will Smith, and Chelsea Handler. His site—markmanson.net—is read by two million people each month. Manson lives in New York City.

“Resilience, happiness and freedom come from knowing what to care about--and most importantly, what not to care about. This is a masterful, philosophical and practical book that will give readers the wisdom to be able to do just that.”
— Ryan Holiday, New York Times bestselling author of The Obstacle is the Way and Ego is the Enemy

“Mark’s ability to dig deep and offer amazing, yet counter-intuitive, insight into the challenges of life makes him one of my favorite writers, and this book is his best work yet.”
— Matt Kepnes, New York Times bestselling author of Travel the World on $50 a Day: Travel Cheaper, Longer, Smarter

“This book hits you like a much-needed slap in the face from your best friend: hilarious, vulgar, and immensely thought-provoking. Only read if you’re willing to set aside all excuses and take an active role in living a f***ing better life.”
— Steve Kamb, bestselling author of Level Up Your Life and founder of NerdFitness.com

“The opposite of every other book. Don’t try. Give up. Be wrong. Lower your standards. Stop believing in yourself. Follow the pain. Each point is profoundly true, useful, and more powerful than the usual positivity. Succinct but surprisingly deep, I read it in one night.”
— Derek Sivers, Founder of CD Baby and author of Anything You Want: 40 Lessons for a New Kind of Entrepreneur

“An in-your-face guide to living with integrity and finding happiness in sometimes-painful places… This book, full of counterintuitive suggestions that often make great sense, is a pleasure to read and worthy of rereading. A good yardstick by which self-improvement books should be measured.”
— Kirkus Reviews