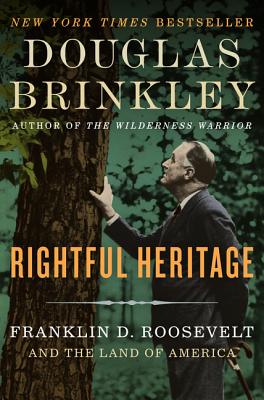 The acclaimed, award-winning historian—“America’s new past master” (Chicago Tribune)—examines the environmental legacy of FDR and the New Deal.

Douglas Brinkley’s The Wilderness Warrior celebrated Theodore Roosevelt’s spirit of outdoor exploration and bold vision to protect 234 million acres of wild America. Now, in Rightful Heritage, Brinkley turns his attention to the other indefatigable environmental leader—Teddy’s distant cousin, Franklin Delano Roosevelt, chronicling his essential yet under-sung legacy as the founder of the Civilian Conservation Corps (CCC) and premier protector of America’s public lands. FDR built from scratch dozens of State Park systems and scenic roadways. Pristine landscapes such as the Great Smokies, the Everglades, Joshua Tree, the Olympics, Big Bend, Channel Islands, Mammoth Cave, and the slickrock wilderness of Utah were forever saved by his leadership.

Brinkley traces FDR’s love for the natural world from his youth exploring the Hudson River Valley and bird watching. As America’s president from 1933 to 1945, Roosevelt—consummate political strategist—established hundreds of federal migratory bird refuges and spearheaded the modern endangered species movement. He brilliantly positioned his conservation goals as economic policy to combat the severe unemployment of the Great Depression. During its nine-year existence, the CCC put nearly three million young men to work on conservation projects—including building trails in the national parks, pollution control, land restoration to combat the Dust Bowl, and planting over two billion trees.

Rightful Heritage is an epic chronicle that is both an irresistible portrait of FDR’s unrivaled passion and drive, and an indispensable analysis that skillfully illuminates the tension between business and nature—exploiting our natural resources and conserving them. Within the narrative are brilliant capsule biographies of such environmental warriors as Eleanor Roosevelt, Harold Ickes, and Rosalie Edge. Rightful Heritage is essential reading for everyone seeking to preserve our treasured landscapes as an American birthright.

Douglas Brinkley is the Katherine Tsanoff Brown Chair in Humanities and Professor of History at Rice University, a CNN Presidential Historian, and a contributing editor at Vanity Fair.  In the world of public history, he serves on boards, at museums, at colleges, and for historical societies. The Chicago Tribune dubbed him “America’s New Past Master.” The New-York Historical Society has chosen Brinkley as its official U.S. Presidential Historian. His recent book Cronkite won the Sperber Prize, while The Great Deluge: Hurricane Katrina, New Orleans, and the Mississippi Gulf Coast received the Robert F. Kennedy Book Award. He was awarded a Grammy for Presidential Suite and is the recipient of seven honorary doctorates in American studies. His two-volume, annotated Nixon Tapes recently won the Arthur S. Link–Warren F. Kuehl Prize. He is a member of the Century Association, the Council on Foreign Relations, and the James Madison Council of the Library of Congress. He lives in Austin, Texas, with his wife and three children.

“[Douglas] Brinkley is one of the nation’s most acclaimed and popular historians [and] Rightful Heritage is a big book about a pivotal time in American history. Brinkley writes admiringly of Roosevelt’s record, but his tone is backed up by a rich trove of research.” — USA Today (four stars)

Douglas Brinkley is America’s most distinguished student of our nation’s environmental history. Rightful Heritage is a landmark achievement. The fullest and most compelling study of FDR’s extraordinary role in perpetuating our natural treasures, it is a must read for anyone interested in the environment — Robert Dallek

A marvelous book; one of Brinkley’s very best. FDR’s conservation achievements helped preserve the nation’s natural bounty and made it accessible to citizens as never before. By telling this grand story so well, Brinkley provokes readers to appreciate how the national government can perform wonders of its own. — Sean Wilentz

Following his definitive look at Teddy Roosevelt’s passion for wilderness conservation, Brinkley now brings us a colorful, exciting narrative of how his cousin FDR carried on the cause. Brinkley gives us a wonderful, timely new perspective on FDR; his wife, Eleanor; and the dedicated environmentalists around them. — Walter Isaacson

With this engaging book, Brinkley recovers one of FDR’s long-overlooked legacies: stewardship of America’s natural resources. This is a vivid history of an important subject. We are lucky that Brinkley has turned his attention to the Roosevelt we do not generally associate with the preservation of our environment. — Jon Meacham

Stunningly researched and compellingly written, Rightful Heritage tells the story of FDR’s love affair with the American wilderness. In our search for compassionate and clear-headed leaders to guide us through the environmental crisis, Brinkley’s vividly detailed account of Roosevelt’s pioneering preservationism serves as a much-needed beacon and bible. — Megan Marshall

Rightful Heritage is an irresistibly powerful and beautiful tale of America’s fraught love affair with its land, told by one of our most gifted historians. Brinkley follows FDR on an astonishing journey that, despite war, depression, and political infighting, somehow preserved what is most precious to us. — Candice Millard